Christmas poems cover a multitude of sins, from the pious to the sickeningly cute. This is a reflection of the schizophrenic nature of Christmas itself – a major religious festival in the Christian calendar, which has been subsumed into a secular celebration of consumerism. As one might expect, Peculiar Poetry takes an oblique approach to Christmas poetry, offering a selection of festive poems that distil the true spirit of Christmas – misanthropic, dyspeptic and self-indulgent - and counterbalances it with the odd religious or romantic Christmas poem. 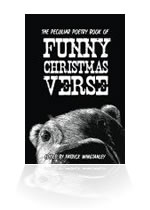 Peculiar Poetry's first (and likely last) venture into publishing is a collection of funny Christmas poems, parodies and nonsense verse by our resident poets Max Scratchmann, Paul Curtis and Patrick Winstanley. Oddly compelling and compellingly odd, you'll enjoy a roller coaster ride through the festive peaks - drinking, feasting and flirtation - and troughs - hangovers, religion and relations - in an anthology overflowing with new poems and Christmas good cheer. Modestly priced and immodest in all other respects, our Collection of Funny Christmas Poetry is as English as hot buttered crumpets and equally irresistible.

'It would be cheap at half the price'
E Scrooge, Esq.

A collection of Christmas poems by Paul Curtis which illustrates just how widely his poetry ranges. Those who have discovered Paul's work elsewhere on Peculiar Poetry will be unsurprised to find examples of both funny and dirty Christmas poems. Perhaps more surprising are the poems about the history and traditions of Christmas - Paul is the author of a prose anthology on the subject - and the religious Christmas poems, which illuminate a respectable side to his character which is perhaps not always apparent in his other styles of poetry.

The selection of funny Christmas poems are ostensibly clean (at least for an adult audience) poems which take a humorous look both the Christmas itself and all the shenanigans - overindulgence, shopping, false bonhomie - which surround the festive period.

Amongst the dirty Christmas poems you'll find poems that are rather more rude or risque than the funny Christmas poems, but there is nothing outrageously dirty or gratuitously offensive.

The origins, history and traditions of Christmas are explored in a series of serious poems, which cast and illuminating light on many of the aspects of a traditional Christmas which many of us take entirely for granted.

Thoughtful and thought-provoking poems which focus on both the biblical message and the significance of the festive period to contemporary Christians.

The collection of Christmas poems concludes with a mixed selection of poems which encompass a variety of subjects and themes - Christmas love poems, sad Christmas poems, poems about modern attitudes towards the festive period and, perhaps most appropriate of all, poems offering warm Christmas greetings to the world.

A small selection of funny poems by Max Scratchmann that focus on the misery and misanthropy which surrounds Christmas for those who endure rather than enjoy the annual ritual. From the premature ejaculation of festive frivolity onto the High Streets in October to picking the last pine needles out of the carpet in June, Christmas is a festival that get under Max's skin for most of the year.

Patrick Winstanley's slender and sometimes disturbing collection of funny poems on a festive theme. The selection is eclectic, taking us from the death of Father Christmas to sexually suggestive Christmas tree decoration via a number of unsalubrious back alleys and twitchells.