We've done the splits (painful, I know) and separated the Halloween poems into collections of funny, dirty and scary Halloween poems. This is an act of appeasement, as English and American readers have completely different notions as to the origins and contemporary significance of this ancient festival. So now nobody has reason to get all huffy-puffy saying 'I don't recognise those poems as relating my Halloween', unless, of course, they're a Christian. 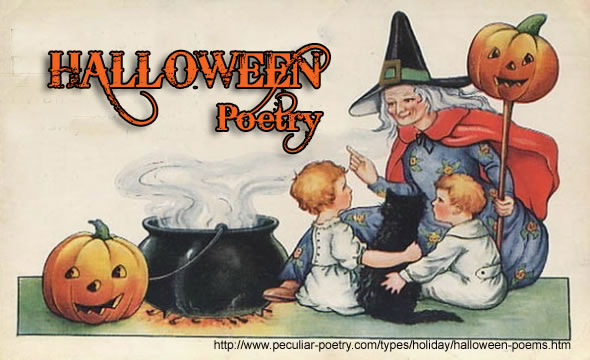 Why all the fuss about Halloween?

Halloween is the strangely trifurcated festival which falls on 31st October. Halloween's origin lies in the ancient Celtic festival of samhain, which marked the start of winter and in true pagan fashion involved real witches and communion with the dead.

Then The Christians Stuck Their Oar In

The Christian Church subsequently appropriated the festival by moving All Hallows' Day, also called All Saints Day, to 1st November, which made 31st October All Hallows Even (the Eve of All Hallows), contacted in time to Halloween or Halloween.

And Trick or Treat?

The final incarnation of the Halloween story is Trick or Treat, which seems to be embraced with gusto in the United States, where no opportunity to eat huge quantities of candy ever goes unmissed, and generally reviled in England, where it is seen as an opportunity for feral youth to behave in a particularly uncouth and menacing manner.

The funny Halloween poem take a generally rather curmudgeonly, anti-Halloween view of things. Paul seems to have a particular bee in his bonnet about the urban terrorism that is Trick or Treat, Patrick takes a characteristically oblique view of the whole affair and Max, as is his won't, tackles Halloween through the medium of nonsense verse.

A selection of Halloween poems for adults which, while not all exactly dirty, have a a frisson of sexual excitement about them. We're talking sexy Halloween costume - outerwear, underwear, any witch wear - and the undoubted allure of the vamp, tramp, hag scene.

A scary poem is never going to be a frightening as a spooky film, TV program or (dare one suggest it) book. Not withstanding this, Paul's collection of scary Halloween poems range from slightly spooky, through sinisterly spectral to spine-chilling, bloodcurdling evocations of witches, warlocks, vampires and the undead. There's even the odd pagan poem thrown in to satisfy our pre-Christian readers.