Peculiar Poetry is a collection of short funny poems for teenagers and adults by contemporary English poets Patrick Winstanley, Paul Curtis and Max Scratchmann. The poems have been variously described as 'really very funny, and very nearly poems', 'symptomatic of a deeply disturbed mind' and 'laughable'.

Funny Poems of Every Shape and Style

The collection is diverse in both style and subject matter, including clerihews, parodies and shape poems on subjects ranging from alopecia to xenophobia. There is lighthearted poetry for teens about the angst of adolescence and adult poetry, both funny and serious, about love, life and the universe. 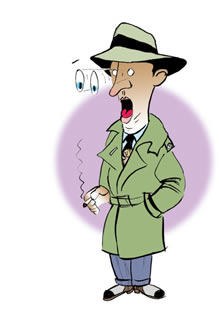 Our newest recruit, Max Scratchmann, is a poet with a most individual voice. Max's initial collection includes clean funny poems, humorous hate poems and literary parodies and nostalgic poems, but the field in which Max excels is nonsense verse. So immerse yourself in Max's parallel universe and prepare yourself the wealth of poems to come.

Paul Curtis, our first poet in residence, is a writer of rare talent who has contributed over four hundred funny poems to the site. His contribution includes collections of sports poems, twisted funny poems, rude nursery rhymes and dirty poems, together with his seminal series of short funny poems about love, life, death and sex. Paul is also a prolific writer of romantic love poems.

Patrick Winstanley's poems are wry, whimsical and weird - qualities which lent Peculiar Poetry its name. Patrick's work ranges from superficially cute and cuddly animal poems, via funny poems about family life and famous people (living, dead and indeterminate) to studiedly rude poems about smegma, vaginoplasty and a host of other unmentionables.

Peculiar Poetry has bowed to convention and included poems for the major holidays and high days in the religious and secular calendars. There are sins of omission, but Peculiar Poetry currently offers christmas poems, halloween poems, funny Mother's Day poems, Father's Day poems and valentines poems, while our sister Love Poetry site has an extensive collection of Paul Curtis's romantic valentines poems.

Not for the Fainthearted...

As one reviewer famously put it, 'Peculiar Poetry combines the comic talent of Karl Marx with the intellectual genius of Groucho Marx.' So expect funny poems that are always wry, often witty, sometimes dark or dirty.  Expect the unexpected…

I'll Take The Red One

Bimbette's visit to a sex shop proves to be an absolute recipe for disaster!

In The London Marathon

Are You Wearing A Fascinator?

There's something wonderfully sexually suggestive about the term fascinator…